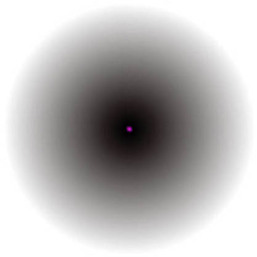 It is impossible to tell where an electron is at any given time.  For this reason, the location of an electron is described as a probability function around the nucleus. The picture on the right shows the "cloud model".  The purple dot is the nucleus, while the haze around it is where the electrons might be.  The darker the area, the more likely the electrons are there.  The 'rings of darkness' are organized into shells.  Each shell has subshells.  Subshells can only hold a certain amount of electrons.  When a subshell is full, the remaining electrons will have to move to the next shell.