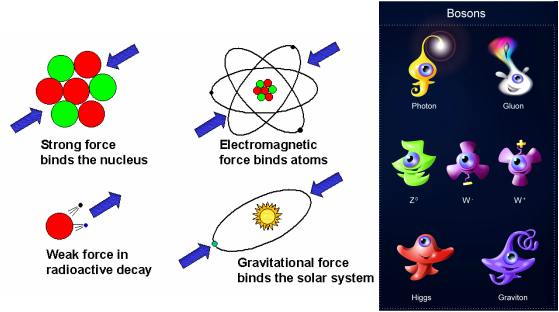 The universe exists only because 4 forces are at work, the Strong, Weak, Electromagnetic, and Gravity.  These forces have different ranges and strengths.

The Strong force, as the name suggests, is the strongest force, but has a range of about an atom.  It glues the nucleus and the quarks inside the protons and neutrons together.

Despite its name, the Weak force is actually a lot stronger than Gravity, but weaker than the other two.  It is responsible for the energy production of the Sun, nuclear fusion.

The Electromagnetic force, like Gravity, has an infinite range, but it is much stronger than Gravity.  It acts on charged particles and is responsible for the propagation of light, and how magnets can attract some objects.

Gravity has infinite range but it is actually the weakest force!  It is hard to believe that Gravity, which pulls you to the ground, is much weaker than all the other forces.  Gravity is responsible for binding solar systems and galaxies together.  Without it, stars, planets, and even galaxies wouldn't form.  However, gravity does not work on the scale of atoms.  It only works on the scale of humans and stars.

There are force carriers for each of the different forces.  The range of the forces is determined by the mass of the boson.  The heavier the boson, the lesser the range.  The gluons carry the Strong force and the W and Z bosons carry the Weak force.  Gravity and the Electromagnetic force have infinite range because their force carriers are massless.  The photon is the force carrier for the Electromagnetic force .  The graviton is theoretical, it hasn't been found yet.  It is supposed to be a massless boson that carries gravity.  The Higgs boson, which was recently found in the LHC (Large Hadron Collider), actually gives an object its mass.  There is still some research going on about how this works.
Powered by