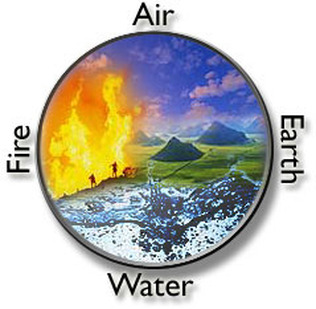 ﻿One of the first people to ask what matter is made of was the Ancient Greek Philosopher Thales of Miletus.  He thought that everything was made out of water!  Soon after that, other Greek philosophers proposed that air or fire was the fundamental substance.  Another philosopher called Empedocles suggested that everything was made from 4 basic elements, air, water, earth, and fire.  We now know today that this is not true, but only recently!  Until the early 1800’s, the 4 basic elements were still widely accepted.
﻿ 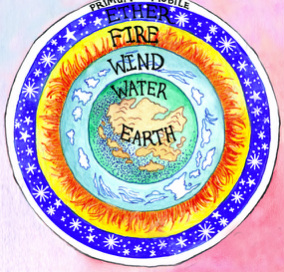 Aristotle, another Greek philosopher, believed that there was also a fifth element, ether, that filled up outer space.  He also believed that heat had the power to change one element to another.  For nearly 2000 years, people believed Aristotle.  This led to alchemy.  Alchemists tried to turn metals like lead into gold.  During their experiments and work, they found many new elements such as phosphorus and invented many tools and techniques that scientists still use today!  Alchemy led to the development of modern science and laid the foundation to the path of discovering the building blocks of the universe. 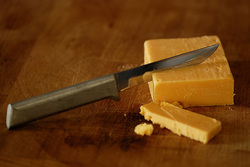 Philosophers Leucippus and his student Democritus asked if a substance could be endlessly divided.  Imagine cutting this block of cheese in half again and again...  They reached a conclusion that, at some point, an indivisible fragment would be reached.  They called this atomos, which meant indivisible.  Democritus kept researching this and said that atoms are solid and indestructible, and that everything is made of atoms in different configurations.  This theory was known as atomism.