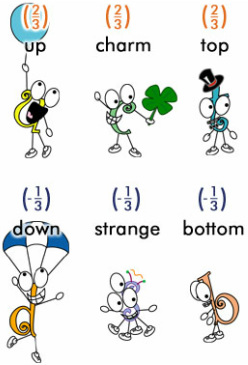 Now you know what protons, electrons, and neutrons are, have you ever wondered if there are even smaller particles?  If there really are, what are they?

Yes!  There are actually smaller particles in existence.  They are tiny particles called quarks.  Both protons and neutrons have quarks inside them while electrons have no known subparticles in them.  Quarks have 6 different flavors, and 3 pairs, as shown in the picture to the right.  They each have a different charge.  Do you know how protons have a charge of +1 and neutrons have a charge of 0?  The quarks inside them have an unusual characteristic of having fractional charges.  In the proton, there are 2 up quarks and 1 down quark.  A up quark has a charge of +2/3 while a down quark has a charge of -1/3.  What do you get when you add them up?  The charge of the proton, 1!  Quarks are sociable and they can only exist in composite particles, such as protons and neutrons, with other quarks. 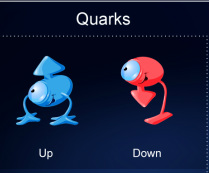 Up and down quarks are the most common quarks since they reside in protons and neutrons.  They are also the most stable.

They have a charge of +2/3 e (elementary charge) and are the lightest of all quarks.

They have a charge of -1/3 e and are the second lightest quarks. . 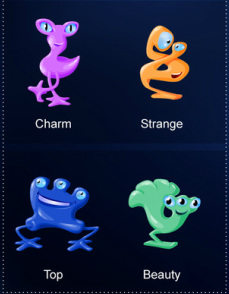 It is the third most massive of all quarks.  They have a charge of +2⁄3 e.

It is the third lightest of all quarks and has a charge of −1⁄3 e.

It is the second most massive and has a charge of −1⁄3 e.

In addition to the quarks, there are also 6 leptons.  They are the electron, electron neutrino, muon, muon neutrino, tau, and tau neutrino.  The leptons are elementary particles because they are not made up of smaller matter.  Electron, muon, and tau are negatively charged while their neutrino counterparts are electrically neutral.  Among the leptons, electron is the lightest while muon and tau have more mass.  Neutrinos are very tiny particles that have very little mass, and are very hard to find.  Leptons are solitary particles, meaning they aren't like quarks.  They don't have to be with another lepton in order to exist.