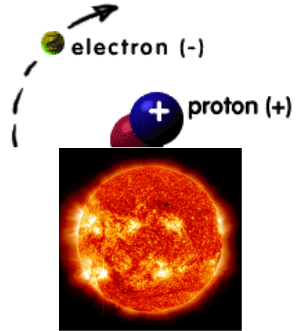 ﻿Ernest Rutherford, a New Zealand born scientist, experimented with alpha particles, which are particles emitted from radioactive elements.  He shot these particles through a thin piece of gold foil.  Most of these would go right through the foil, while 1 out of a 1000 would hit something dense and bounce back.  He had discovered the nucleus.

In 1918, he found that when alpha particles were shot into nitrogen gas, detectors saw signs of hydrogen.  He concluded that the nitrogen nucleus must also contain a hydrogen nucleus. Since hydrogen has an atomic number of 1 and there was nothing smaller, he concluded that the nucleus was also made of particles!  The particle that Rutherford discovered was the proton. ﻿

Neutrons live in the nucleus of an atom and play a major role in keeping the atom together. Without the neutron, the protons would fly away!  They have a charge of 0 and are a little heavier than the proton.  The number of neutrons determines the isotopes of an element and hence the mass and the radioactive properties of it.  For example, carbon-14 has two more neutrons than carbon-12 and so it is heavier and radioactive.
Powered by