Standard Model and the Future 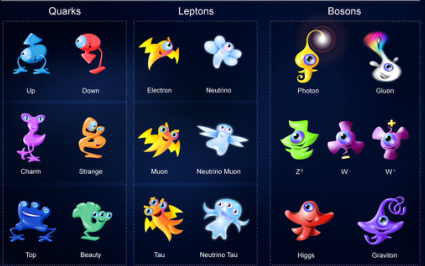 The Standard Model is a theory that describes how all the basic building blocks of matter which interact with the 3 forces, namely, the Strong, Weak, and Electromagnetic forces.  The model includes all of the particles described on my website, like quarks, bosons, and so on.  It states that all matter is made up of elementary particles, the building blocks of matter.  The two basic types of these particles are quarks and leptons.  The Standard Model describes all the elementary particles that make up matter in the universe, including their behavior and the forces that bind them to each other.  The major exception is the graviton, which should be a massless boson that carries the gravitational force, and it is yet to be found.  Therefore the Gravity force is not included in the model yet.  Nevertheless, the Standard Model is an elegant, consistent, and predictive theory when it is used to explain the subatomic world .

There is still many unanswered questions that scientists at CERN are trying to answer beyond the Standard Model.  Since the early 1900's, scientists have been working hard to find new particles.  At this rate, it is certain that there will be new discoveries, new explanations, and new theories in the future.  Besides the Standard Model, open questions on topics such as Dark Matter, Extra Dimensions, Supersymmetry, and Strings are waiting to be answered.  If the scientists can answer these questions, it will definitely help to unlock the many secrets and mysteries about the universe.  For now, the LHC will continue to find new particles, and particle physicists will continue to do research on these fascinating particles.

I have always been amazed by the fascinating world of particles.  Something so small, yet so important, has made me stop and think just how crucial these tiny particles are to us.  It makes up all the matter in the universe, including our bodies.  All these different particles play important roles in our daily lives without us even noticing it.  Without them, we, the earth, and even the universe would not exist.  And yet human only has a tiny fraction of the full understanding of particles and the universe.  This topic has always been my field of interest.  I will keep learning more about this topic by keeping myself up to date with the latest development and studying up on Physics or related science subject that will enable me to understand this topic as much as I can.
Powered by